Today, the department is committed to recruiting and retaining loyal and dedicated members. The membership has a combined total of more than 325 years of service with the Department. More than one-third of the members have individually served the Bonner Springs Fire Department for over ten years with two members dedicating over 30 years to the fire service.

During the 1920s and 1930s, Bonner Springs experienced population growth due to industrial and commercial expansion. Movement into rural areas of the city, the railroad’s proximity, and more automobiles caused an increase in the number of calls for the volunteer department. By the mid 1940s, the Department was responding to over 100 calls a year.
In 1948, in order to cover the rural areas and the less developed surrounding communities, Bonner Springs opted into the Delaware Township Fire Department. This did not detract from the City’s Department, but provided additional manpower and equipment support during the times of light coverage. At one time, the Township retained 44 members in its multi-station department. Delaware Township remained a part of the City until the mid- 1970s.

Chief Walter Honeywell, during the 1950s, opened up the Department to the community for more than fire suppression. October 3-10, 1954, the Department participated in Kansas’ officially proclaimed Fire Prevention Week. Members collected potentially fire hazardous articles from participating citizens throughout the week. For twenty years this activity became an annual event. The week ended with fire apparatus tours. In 1955, Chief Honeywell and three firefighters took a new fire truck to all of the schools. By day’s end, 858 students had learned about and toured the new vehicle. Station open houses are still part of every Fire Prevention Week. 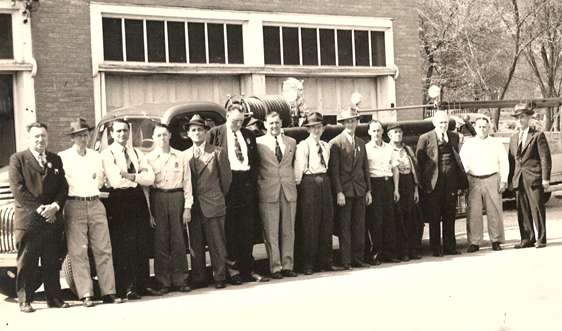 Chief Tony Dusil continued with community education through the 1960s. Due to worldwide conflicts, the Department reached an all time low of twenty-one firefighters. The community, who now viewed the Bonner Springs Fire Department as the primary emergency-care givers, responded overwhelmingly. The School District and local businesses pledged time off for daytime calls to employees who dedicated themselves to the Department. This effort provided twelve new firefighters and sealed the bond between the Department and community it had sworn to protect.

Chief Dusil was instrumental in initiating advanced first-aid and, later, ambulance service for the Bonner Springs area. In January, 1975, the firefighters began taking advanced first aid, and emergency medical technician training was approved by the city council. The plan was to have an ambulance by 1976 for the new station. In January of 1976, the city manager found it prudent to separate fire and ambulance into two departments, and Chief Dusil was assigned to the ambulance department.

Upon the separation of the departments, Chief Dean Jordan was promoted to Fire Chief. Later that year, Chief Jordan proudly stood with the members of his Department at the ribbon cutting of the Bonner Springs Fire Department station. Today, Chief Jordan remembers the Department with fondness, recalling hard work and good times spent with a good group of men.

Warren Hanks was promoted to Fire Chief in September of 1978 and served in this capacity until his retirement in 2003. During his twenty-five years of supervision, the Department saw significant growth and many changes. Chief Hanks’ tenure as Fire Chief was one of the longest in the state. In 2000, he was honored by the Kansas State Association of Fire Chiefs as Fire Chief of the Year.

In July 2012 Dennis "Denny" Hubbel was promoted from Assistant Fire Chief and assumed the role of Fire Chief with the retirement of Clinton Long. Chief Hubbel looks forward to taking the Fire Department to new and increased levels of professionalism and training. He takes great pride in providing exceptional care to not only his personal and Fire Department families but our Community family as well. The Fire Department will continue to be “An Organization Professionally Operated by Volunteers!”
Employment
Governance
Online Payments
GIS Maps
Report A Concern
Financials
/QuickLinks.aspx
[]